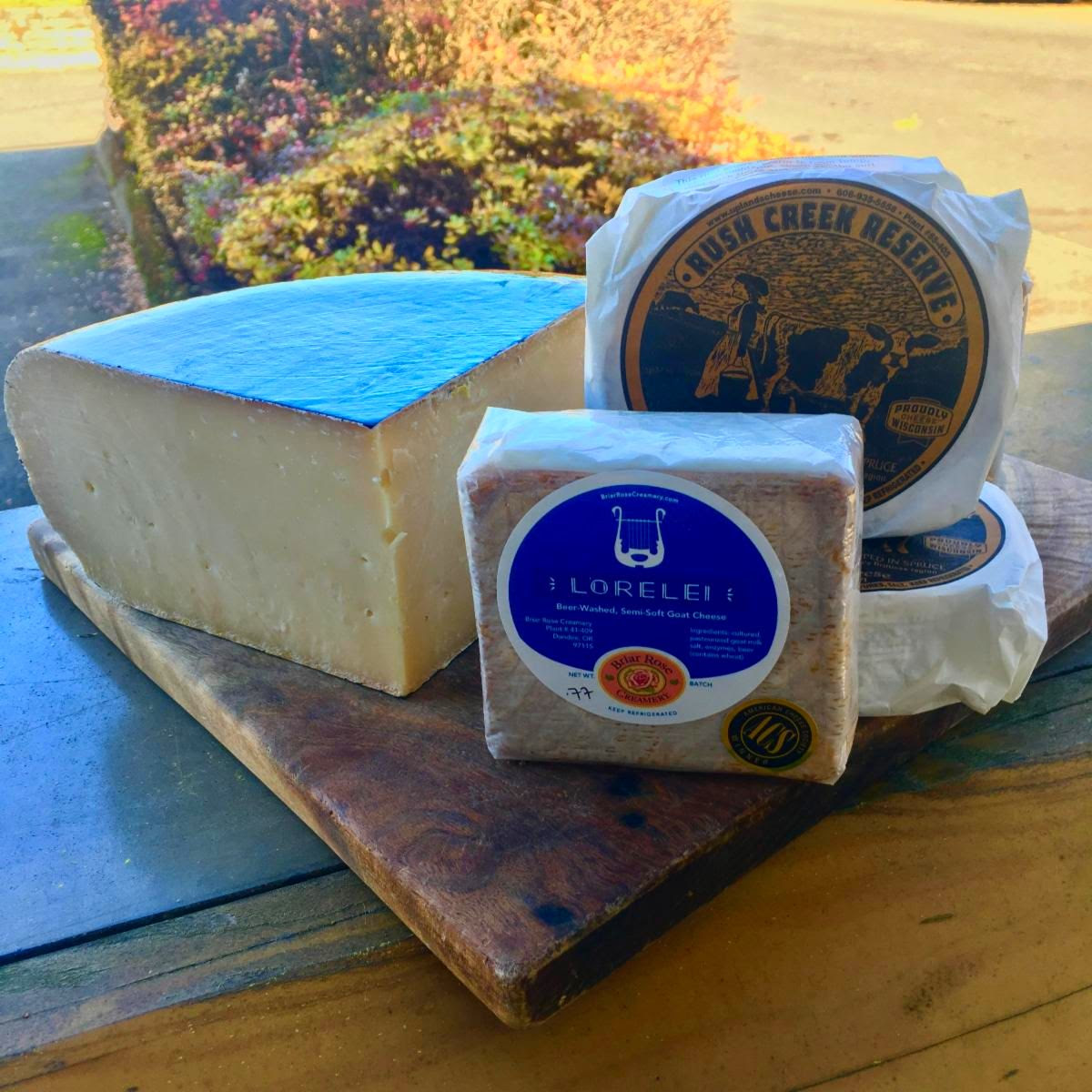 Like the holiday season, there are certain cheeses that only grace us with their presence for a short and specific period of time. Every year, we look forward to the arrival of these special wheels, and revel in their joy while available.
Cheeses can be seasonal for many reasons. In the case of hard cheeses, though they are made in the spring or summer, they reach their peak ripeness in the winter months, with some taking an extra year of aging before release. Soft cheeses made in the fall or winter benefit from the rich flavor of winter milk. As animals transition into the hibernation of winter months, their milk yield is lower but much richer, bursting with more concentrated flavors and robust quality from hay feeding instead of open grazing. These unicorn cheeses, often spoken of but rarely seen, are the perfect choice to add a little richness to any upcoming special occasions.
Rush Creek Reserve
Uplands Cheese Co. is a true farmstead production, producing only two cheeses, one for each season of production. Their flagship Pleasant Ridge Reserve is based on French Beaufort and, like its predecessor, is only produced in the summer while cows graze on fresh grass. Following in Beaufort’s footsteps again, cheesemaker Andy Hatch transitions production to the Rush Creek Reserve as the weather changes, producing a lush creamy cheese modeled after the same region’s Vacherin Mont D’Or. Making use of the lush fall and winter milk, Rush Creek Reserve’s is wrapped in spruce bark and washed during its two months ripening period, producing a rich and unctuous cheese that is easily the centerpiece of any cheeseboard.
Black Betty
Released every winter, Black Betty is a collaboration between L’Amuse in Amsterdam and their importer Essex Street Cheese in New York. In addition to several other cheeses from all over Europe, Essex Street brings in L’Amuse Brabander, a goat milk Gouda aged approximately 6 months, producing a tangy, creamy cheese. Once these wheels reach Essex St, affineur Betty Koster hand selects wheels to be aged even further, an additional 6-9 months, bringing out notes of butterscotch, dried fruit and candied nuts. To distinguish this cheese while it ages in their cellars, the wheels are coated with a bold black wax and named after their caregiver.
Lorelei
This award-winning beloved Oregon Cheese is making a very short re-appearance in the market and Cheese Bar is one of the lucky few to have it in stock.If you haven’t had this cheese before, Lorelei is a semi-soft small format goat cheese washed in Deschutes Black Butte Porter. Nutty and tangy, creamy and dense this cheese was a constant favorite. As Briar Rose moved into making cows’ milk cheeses, Lorelei became unavailable, but has still been sought after in the same way its namesake, a German river siren, lured sailors to its waters.
Rogue River Blue

Winner of World Cheese Awards Best in Show, Oregon officially has the best cheese in the world! Made from organic milk of cows who graze along the Rogue River, the Rogue River Blue truly captures Oregon agriculture in one bite. Small batch wheels are hand wrapped in Syrah leaves that have been soaked in a pear brandy, the cheese is then cave aged for 9 to 11 months, yielding flavors of hazelnut, blackberry and vanilla. This cheese has been a fast seller and supplies are very limited, so come in for your piece today!

We are excited to have Julia Bailey of Loop de Loop Wines pouring for us this Thursday evening. In 2012 Julia Bailey established Loop de Loop Wines in an effort to put into practice the techniques she learned from working in Oregon’s wine industry. Julia spent time training at a number of local wineries including Love and Squalor, Goodfellow Family Cellars, and Patricia Green Cellars.

Loop de Loop Wines used only indigenous yeast and undergo no manipulation, with minimal intervention of any sort. The effort here is to showcase the fruit and the place from where it comes.

Here’s what Julia will be pouring:

2018 Willamette Valley Chardonnay
All native yeast fermentation with no new oak. A bright and clean Chardonnay from 35-year-old vines.
2018 Romeo Red, “Vin de Soif,” Cabernet Franc and Pinot Noir
A 50/50 blend of Cab Franc from Rattlesnake Hills Vineyard and Pinot Noir from Symonette Vineyard of the Eola-Amity AVA. This wine was inspired by French bistro wines of the Loire Valley. This wine is bright and playful.
2017 Willamette Valley Pinot Noir

This Pinot Noir is made from a blend of fruit from three different Willamette Valley Vineyards: Symonette Vineyard in the Eola-Amity Hills AVA, Van Duzer Corridor’s Johan Vineyard, and a third vineyard from the Dundee Hills. As with all of Loop de Loop Wines, this Pinot underwent spontaneous fermentation with the wild yeasts from the vineyards’ fruit.

2018 Four Winds Pinot Noir, Willamette Valley
Thursday will be the first release of this Pinot Noir! All the fruit for this wine comes from the Four Vineyards Vineyard in McMinnville, Oregon. This wine is extremely limited, only four barrels were made! As always tastings are complimentary!

Raclette Night is Back!!

Every Wednesday until Spring 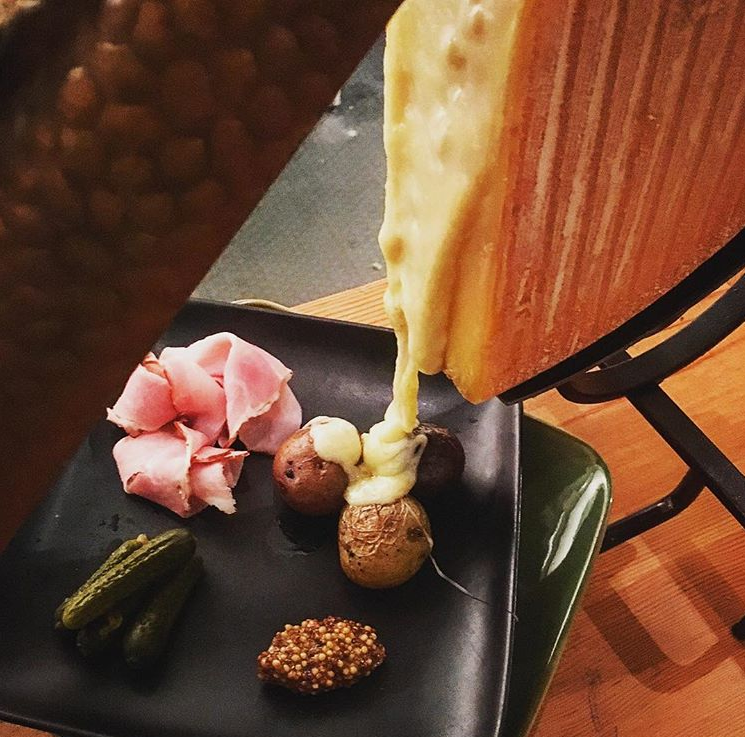 Every Wednesday until the tulips come up in the spring, we will be doing traditional Raclette service. Starting at 5:30 and going until the cheese is gone! We cut a quarter wheel of raclette for service every event, so get in early because it could go quick!
$7 per plate
Roasted Potatoes, Ham, Cornichons and House Mustard all topped with ooey, gooey Raclette
See you there!
Previous Post: « Lovely Rita Introduces a New Brunch to Downtown Portland,
Next Post: Ava Gene’s X Stumptown Brunch Nov. 15-16 »