Join Chef Sara for tips and tactics on how to keep a sustainable kitchen, her go-to Spanish Tortilla recipe for using up whatever’s hanging out in the fridge, and tiny fish talk! 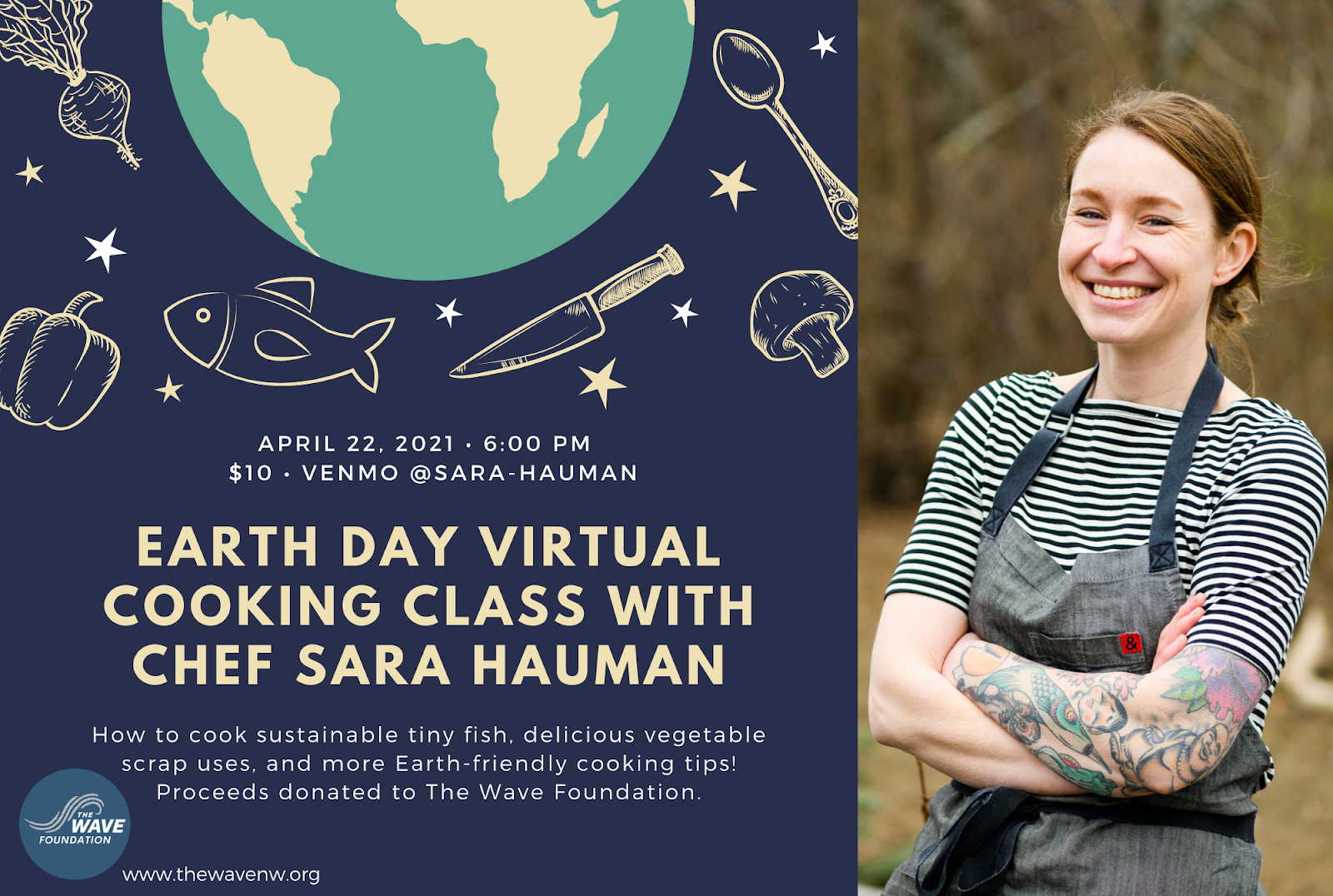 PORTLAND, Ore. (March 23, 2021) – Top Chef season 18 contestant Sara Hauman is hosting an Earth Day virtual cooking class! Attendees will learn Sara’s own tactics for keeping a sustainable kitchen, from cooking with tiny fish to support biodiversity and local fishing communities, to using all parts of the fish (heads, tails, bones, guts, and all), and her go-to Spanish Tortilla recipe for using up whatever’s hanging out in the fridge. This is a great chance for attendees to ask Sara any and all cooking questions. The class will be held on Skype, attendees can Venmo Sara $10 @sara-hauman to receive a link to join. All proceeds will be donated to The Wave Foundation, an Oregon based nonprofit that’s dedicated to leveraging crises to create change by improving broken systems, developing infrastructure, and elevating the voices of those historically left behind.
About Chef Sara Hauman
Chef Sara Hauman grew up in Vista, Ca., a small town in north San Diego County. After graduating high school, Sara moved to the south of Spain. Food became an obsession and ultimately fueled her decision to return to the U.S. to attend culinary school.
After returning to the States, Sara began working in restaurants and attending culinary school full time. By the time she reached the age of 22 she was ready to try on a bigger city for size and relocated to San Francisco, Ca. It is here where Sara really began to thrive in the restaurant industry. Working with Brandon Jew at Bar Agricole helped shape Sara’s simple approach to food.
In 2013, Sara once again returned to Spain to work at famed restaurant Asador Etxebarri. Here she gathered more appreciation for simple and locally sourced food as well as a different lens through which to see food. It is this experience that helped propel Sara into her first head chef position at Huxley in San Francisco where she garnered many accolades and awards, including 3 stars from the San Francisco Chronicle, Eater Young Guns, Zagat 30 under 30 and James Beard semi-finalist Rising Star Chef 2016 and 2017.
In 2017, Chef Sara was named Rising Star Chef for the San Francisco Chronicle while working as chef de cuisine under Melissa Perello at one-michelin starred restaurant Octavia.
Sara currently works as the head chef at Soter Vineyards in Carlton, OR, and resides in Portland. Sara will be competing on the upcoming season of Top Chef filmed in Portland. Chef Sara is available for private events, contact her at chefsarahauman@gmail.com
Follow her on Instagram @ChefSara_H and sign up for her newsletter to know about upcoming events and announcements.
About The Wave Foundation
The Wave Foundation is a nonprofit coalition of stakeholders collaborating to accelerate programs that address climate change, environmental & social justice, and youth engagement. Our work is centered around five program areas: Healthy & Sustainable Food, Clean Air & Water, Clean Energy, Clean & Equitable Transportation, and Zero Waste. The Wave Foundation’s Food Program feeds the food insecure and focuses on “build back better” approaches with an emphasis on infrastructure development and sovereignty goals. The program is inclusive of Black, Indigenous, and People of Color (BIPOC) communities, giving preference to sourcing from these providers and providing healthy, sustainable, and culturally relevant foods to these communities. By building a more resilient and regional food system, our program supports additional markets with fair and reasonable prices for BIPOC communities, family farmers, and small-boat fishers. We designed our program on a holistic “communities helping communities” model ensuring nutritional value and food with dignity. To learn more about The Wave Foundation and its food program visit: thewavenw.com/food-program.
Previous Post: « News From Pigeon + Friends: A New Cellar Sale week of 3/23
Next Post: Enter our Dogs of Ninkasi Photo Contest »