On Wednesday, November 20th, the SE Wine Collective celebrates Oui! Wine Bar + Restaurant Chef Althea Grey Potter’s two Food Network appearances with a double header viewing party
PORTLAND, Ore. (November 12, 2019) – On Wednesday, November 20th, SE Wine Collective, the urban winery and home to Oui! Wine Bar + Restaurant, will throw a double header viewing party for Chef Althea Grey Potter’s Food Network debut. Chef Potter will appear on the Food Network this fall – not once, but twice – on episodes of Chopped and Guy’s Grocery Games. The SE Wine Collective will host a free viewing to watch the drama unfold in the cellar, and there will be beer and glass pours available for purchase along with TV watching snacks. Oui! Wine Bar + Restaurant will be offering the Happy Hour Food menu all night in the bar, so that the kitchen staff can be in on the fun!  Happy Hour kicks off at 4pm at Oui! Wine Bar + Restaurant. In the cellar the projector will be rolling at 6pm for Chef Potter’s Chopped episode, followed by her Guy’s Grocery Game appearance at 7:15pm. 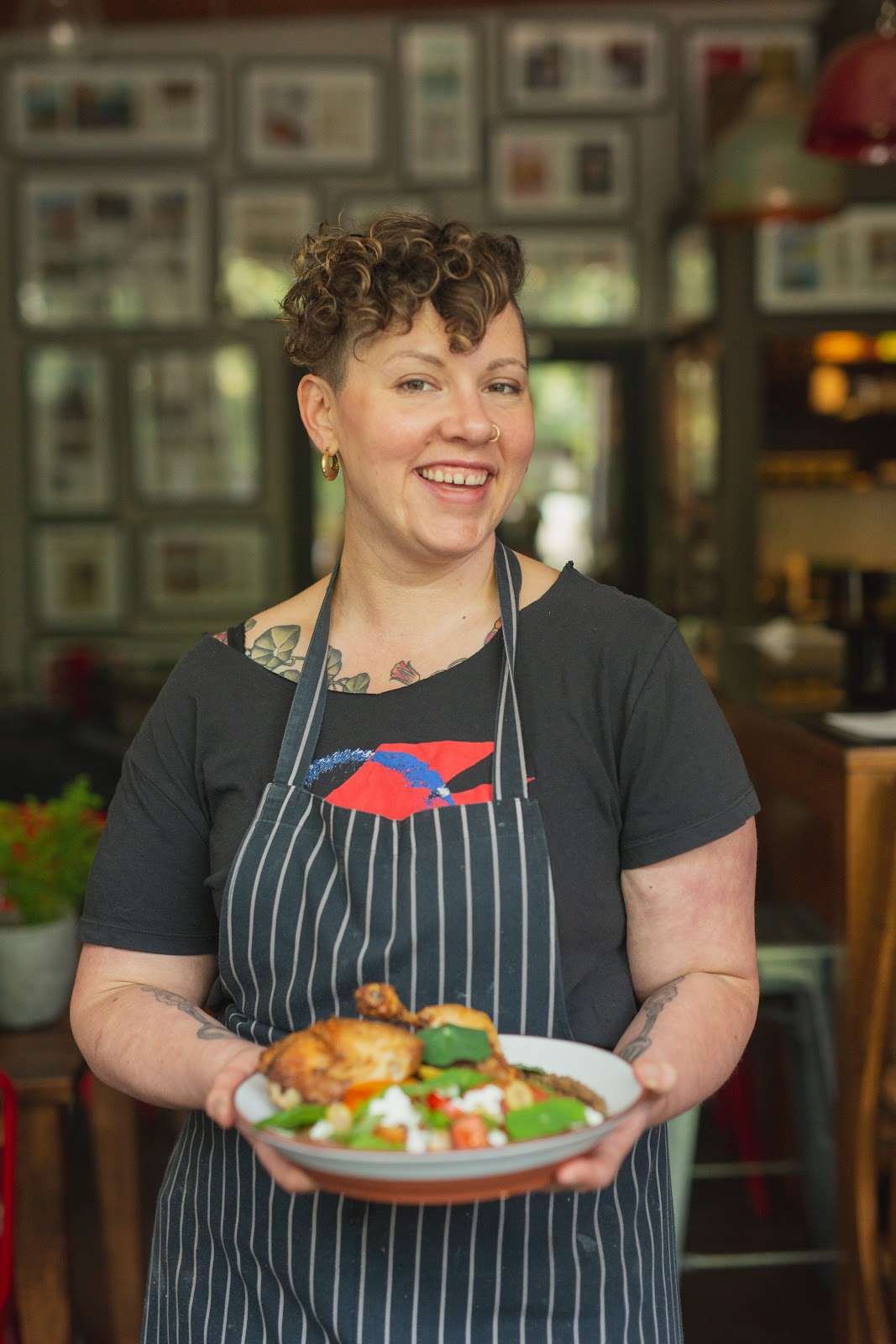 WHEN
Wednesday, November 20th
4 to 10pm – Chopped will be shown at 6:00pm, Guy’s Grocery Games will be shown at 7:15pm
WHERE
SE Wine Collective
2425 SE 35th Place
Portland, Oregon 97215
DETAILS
Chef Althea Grey Potter’s Chopped appearance will be shown at 6:00pm and Guy’s Grocery Games will be shown at 7:15pm. This double header viewing party in the cellar is free and open to the public, with beer and wine glass pours available for purchase along with a TV watching worthy nacho bar. Oui Wine Bar + Restaurant will offer their Happy Hour Food Menu all night. For more information, visit SE Wine Collective’s website, or visit Facebook.
ABOUT SE WINE COLLECTIVE
Kate Norris and Thomas Monroe, of Division Winemaking Company, founded the Southeast Wine Collective in 2012 in response to their personal interest in creating a unique multi-faceted urban winery, coupled with increasing public interest in the urban wine movement. The pioneering urban winery brings together like-minded wineries who are sustainably growing their businesses by offering a venue for commercial custom crush wine production, tastings and events in the bustling area of SE Portland, and is also home to Oui! Wine Bar + Restaurant. The collective is made up of 7 wineries: Division Winemaking Company, Gersing Cellars, Laelaps Wines, Loop de Loop, Ore Winery, Pampleau, and while continuing to work as an incubator for future wine brands and budding industry ideas. Currently 20 varieties of grapes are vinified at the Collective ranging from Pinot Noir, Chardonnay and Pinot Blanc to less common Oregon and US produced varieties such as Gamay Noir, Pinot Meunier, Chenin Blanc, and Nebbiolo. The wine bar and restaurant, Oui!, features pours, flights, glasses and bottles from all Collective members plus an extensive list of global wines that inspire the makers, along with draft beer, wines on tap, and a creative and seasonal food menu by chef Althea Grey Potter. Wine bottles and growlers of wine and beer are also available for retail purchase to-go. Oui! was named to Eater’s 38, a Best New Restaurant 2018 by Portland Monthly, a Best Restaurant in Portland by Time Out, one of Portland Monthly’s 15 All-Time Favorite Places to Drink in Portland, The Oregonian’s 10 New Wine Bars in Portland, and has received recognition from The Portland Mercury in the article, “Badasses in the Kitchen”. In 2016, co-founders Monroe and Norris were named to Wine Enthusiast’s 40 Under 40 list of tastemakers. The Collective was listed among the Top 20 Best Wine Bars in America by Wine Enthusiast, one of the 11 Must-Eat Restaurants in Portland by Town and Country, 10 Best Urban Wineries in USA Today, and Best Wine Bars in The Oregonian. Travel + Leisure called the Collective a must for any wine connoisseur’s Perfect Weekend in Portland, It has also been featured in Food & Wine Magazine, the New York Times article “Bringing the Wine to Portland, Ore.”, Wine Spectator’s “The New Portland”, Portland Monthly’s article “Meet Portland’s Top Urban Winemakers, and named a favorite place to try new Oregon wines in Willamette Week. Eater called the Collective one of the 14 Vital Restaurants on SE Division and Willamette Week called them pioneers in the Portland wine bar scene. Wines produced at the Collective have been mentioned in The New York Times, San Francisco Chronicle and Los Angeles Times. The winery hosts large and small events, wine release parties and winemaker dinners and is available for rent for private parties. Its hours are Mon. 4 – 9 p.m., Wed. through Thurs. 4 – 10 p.m., Fri. 4 – 11 p.m., Sat. 1 p.m. – 11 p.m. and Sun. 1 p.m. – 9 p.m., or by appointment. The Collective is located at 2425 SE 35th Place, Portland, Oregon 97215. Find more information at www.sewinecollective.com, Facebook SE Wine Collective, Twitter @SEWineColl, Instagram @SEWineCollective or by calling 503-208-2061.

If you have to be in the hospital, things like thi