Also, share the sweet celebrations with a Party Pack of 12 Saltie Singles.

PORTLAND, Ore. (June 3, 2021) – Salt & Straw is putting a lot of heart and hugs into their limited-edition Pack of Cold Ones series, available for nationwide delivery starting June 7. This new menu captures the love we have for the father figures in our lives, while paying homage to the company’s early beginnings and celebrating sunnier days ahead. Dad-approved flavors include Reverend Nat’s St. Citron Margarita Sherbet, Breakside Brewery’s Half & Half Crunch, and vegan Modern Times’ Nola Coffee Stout.

Salt & Straw is especially excited to work closely with master brewers at each brewery to focus on the flavors and techniques they’ve perfected. Breakside Brewery’s Dark Cabaret, a slightly smokey barrel-aged stout, pays tribute to the dark ales of Northern Europe. In Breakside Brewery’s Half & Half Crunch, Salt & Straw used these same grains to create a beer wort that’s just as chocolatey and nougaty as the original. 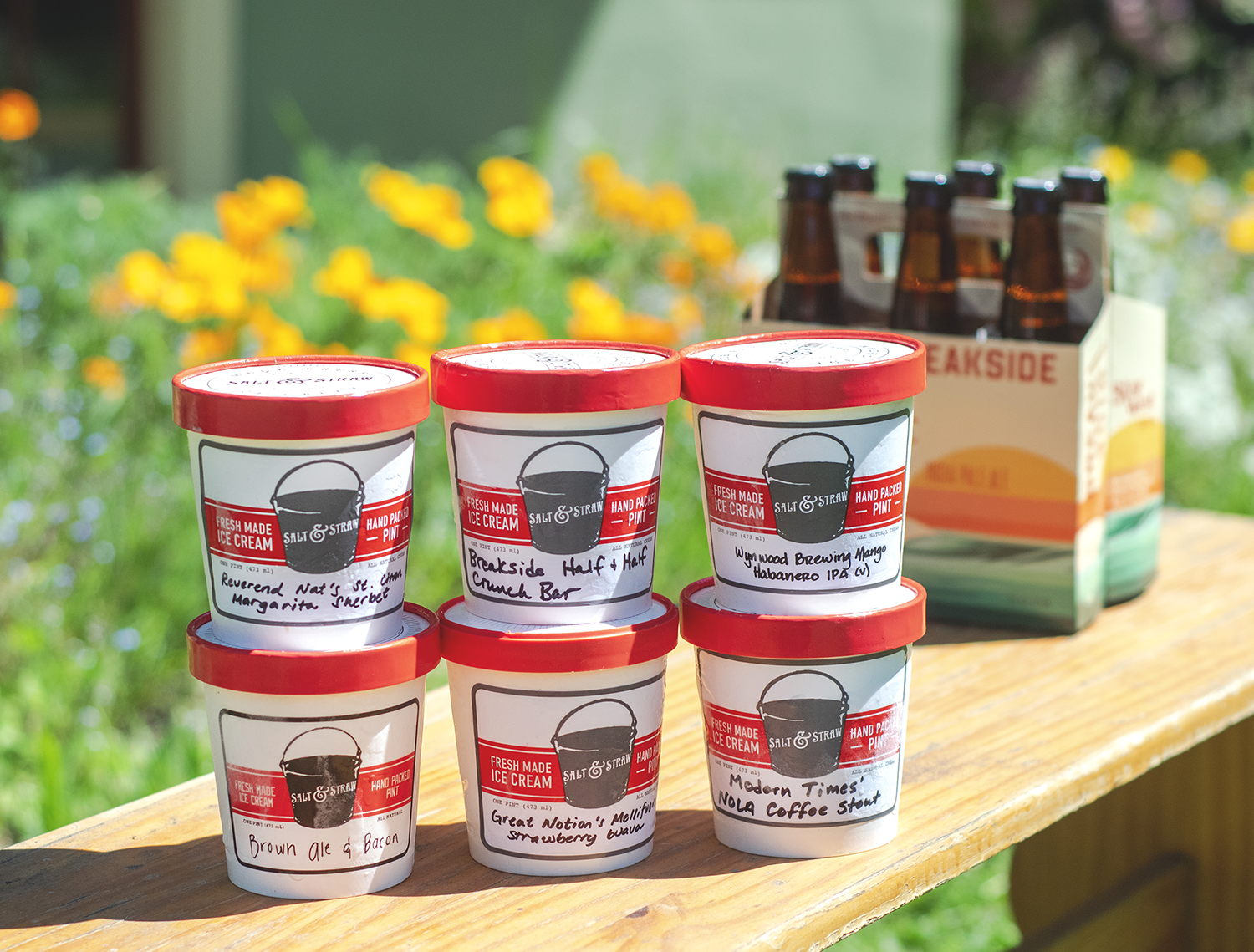 Order a 5-pack for a dad or a graduate in your life for only $65 plus shipping, with an option for a 6-pack for $78 plus shipping. To order, visit www.saltandstraw.com.

Limited Edition Brewery “Pack of Cold Ones” (Launch: June 7th)
When Salt & Straw first began, the company drew a lot of inspiration from the craft brewing industry, as they also come from a long history of unconventional flavors. From a custom brew from Grand Notion to the downright playful creativity at Reverend Nat’s, each flavor showcases a different ground-breaking brewer in their own right. So kick back and crack open a cold one.
Great Notion’s Mellifluous Strawberry & Guava Smoothie Sour
The crazy inventive line-up at Great Notion has a serious cult-like following, with obsessive fans eagerly awaiting each new flavor drop. We got ahold of Batch #2 of their ever-changing Mellifluous Smoothie Sour—this one a fruit-laden powerhouse—and added loads of roasted strawberries, a bit of extra hops, and a generous pour of their delicious beer to cream. Then, we followed it up with a passionfruit & guava curd to play up its tropical notes. It’s creamy and ultra fruity, or if you’re looking to explore the taste more deeply, it’s simply one of the best you’ve ever had.
Reverend Nat’s St. Citron Margarita Sherbet
We’re seriously obsessed with Portland cider maker Reverend Nat’s St. Citron — thanks to its bright, citrus-meets-salty pucker — so we gladly took on the challenge of reimagining it into frozen form. We combine fresh citron juice, full of bergamot and yuzu lemon-lime flavor, add in a dash of salt and a good squeeze of lime for one carefully balanced citrus explosion; no salted rim required.
Modern Times’ Nola Coffee Stout (v)
The folks at Modern Times do everything a little differently – a little more intensive, and a lot more delicious. Their Nola Coffee Stout is no exception. We steep their stout wort (a bittersweet syrup that remains after the mash) with cacao nibs to harness the stout’s malty richness into cream, before adding in gently toasted bits of shredded coconut. An intensely dark housemade chicory fudge, using Modern Times’ own Shadow Party Coffee, adds a coffee-forward kick.
Breakside Brewery’s Half & Half Crunch
Ben Edmunds, Breakside Brewery’s brewmaster, continues to push the limits on both flavor combinations and brewing techniques, with the brewery’s vintage barrel series taking a modern approach on historic inspirations. Their Dark Cabaret, a slightly smokey barrel-aged stout, pays tribute to the dark ales of Northern Europe. After swearing to recipe secrecy, we used these same grains to create a beer wort that is just as chocolatey and nougaty as the original. Crunchy bits of malted caramelized white chocolate are crumbled throughout for buttery, golden good measure. We consider this our most delicious history lesson yet.
Wynwood Brewing Mango Habanero (v)
We take the hop-heavy Laces IPA from Wynwood, Miami’s first craft brewery, and add a load of fresh habaneros, then cool it off with Florida mangoes and citrus. This beautifully clean, simple sorbet is as refreshingly quenchable as their beer.
Made with Wynwood Laces IPA
Contains: Wheat
Brown Ale & Bacon (6th pint available)
When Salt & Straw opened, maple bacon was everywhere, so we would have been remiss to completely skip the trend. In true early form, we wanted our take to be unique, so we went to an unconventional partner for the answer: a brewer. Brown ale has a sweet maple-y flavor. This flavor marked our first-ever collaboration with a local brewery, now a favorite of ours, and presented the challenge on how to mimic their brewing process in ice cream.
Contains: Milk, Wheat, Tree Nuts (coconut) 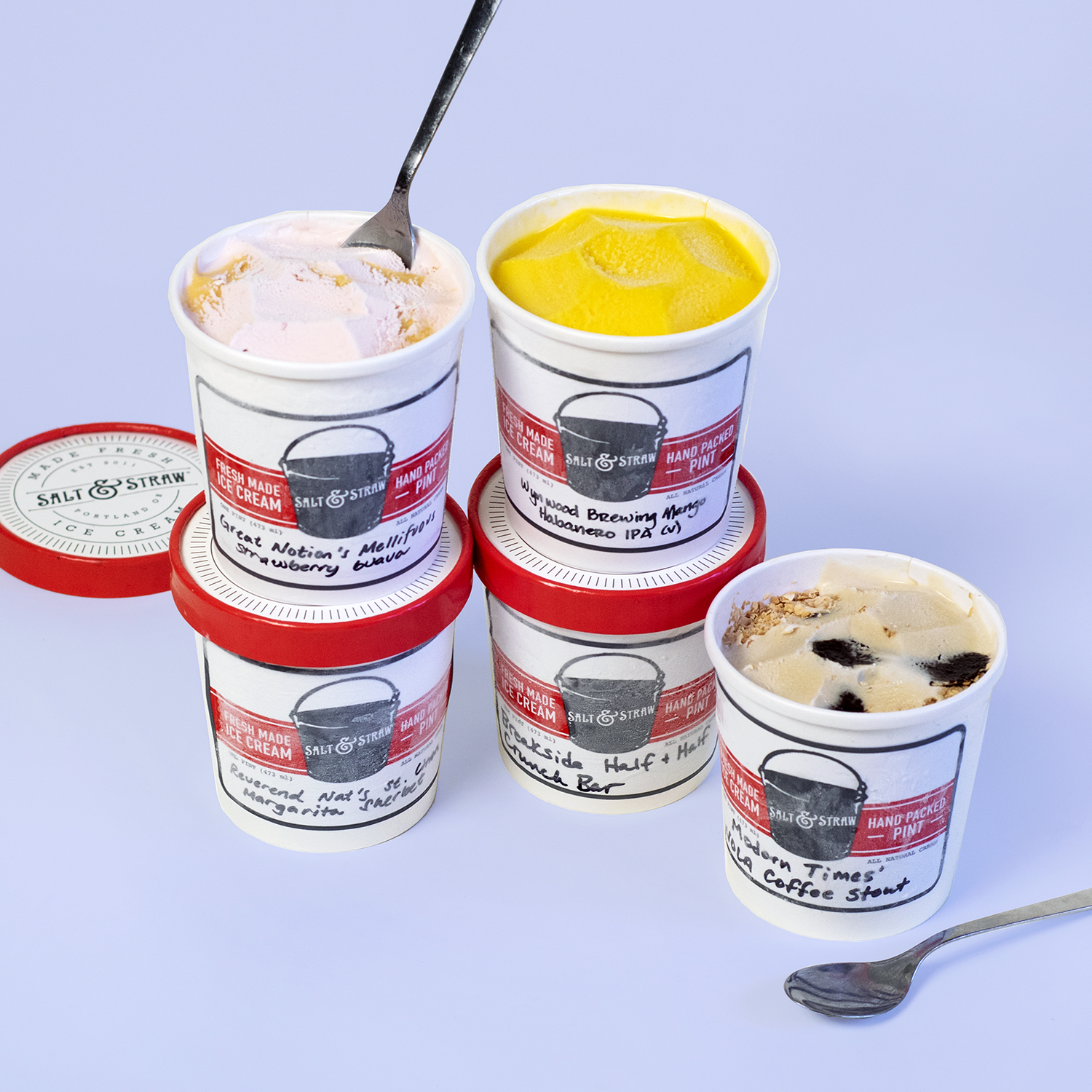 Expecting a larger get-together? Saltie Singles are the answer! Choose a Party Pack from one of three flavors: Chocolate Gooey Brownie, Honey Lavender or Double Fold Vanilla. Each pack includes 12 single-serve cups (3.6oz each), perfect for cheers-ing the Best Dad in the World or the Class of 2021. Available online for $60 plus shipping.

Salt & Straw Ice Cream is a Portland-based, family-run ice cream company that was founded in 2011 by cousins Kim & Tyler Malek. Salt & Straw makes unbelievably delicious ice creams that tell the narrative of artisans, meaningful food movements and important social causes. The company creates a unique menu in each city that changes every four to six weeks, makes ice cream by hand in small batches and designs a generous store experience that’s personalized and welcoming. The debut Salt & Straw Cookbook was released in April 2019, published by Clarkson Potter. Salt & Straw presently has three scoop shops in Portland, and one in Lake Oswego. Pint packs are available for online purchase, and can be shipped anywhere in the United States as well as through the Salt & Straw Pints Club.