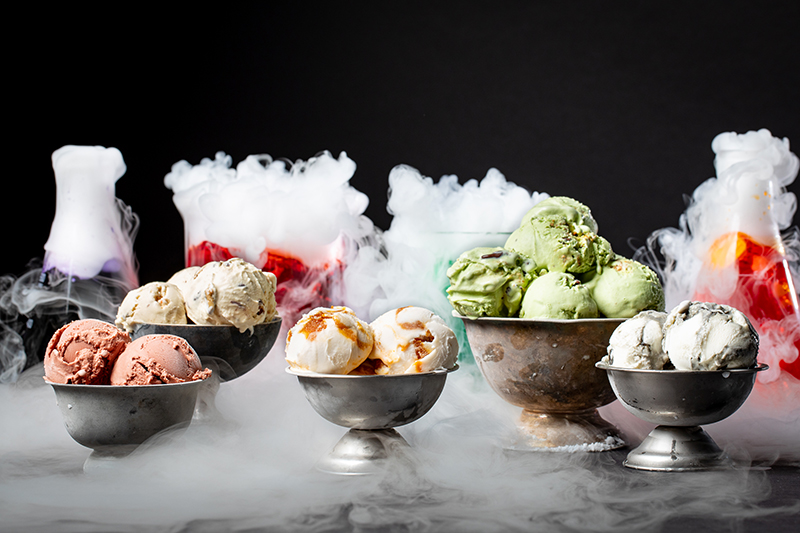 PORTLAND, Ore. (September 30, 2019) –  Salt & Straw, the iconic family-run ice cream company known for their taste provoking, imaginative ice cream creations is bringing back its frighteningly popular Spooktacular Series to scoop shops this October. These terrifyingly tasty treats let guests’ imaginations run wild with flavors such The Great Candycopia, a gruesomely tasty combo of salted butterscotch ice cream and an abundance of homemade chocolatey, caramely, nougaty, candy bars and peanut butter cups, Mummy’s Pumpkin Spiced Potion, a cursed brew of heady spices and dried pumpkin tea in coconut cream with a rich pumpkin swirl, and Dracula’s Blood Pudding, a combination of warm spices, cream and pig’s blood that will make you squirm with delight. Double-dare your friends into a scoop of Creepy Crawly Critters a light and fresh grass-green matcha ice cream spiked with zesty orange… hiding tasty swarms of real bugs!
To summon the spirit(s) of Shocktober 31st, the ice cream maker brought back to life their most eerie flavors and concocted a few new sinister creations, all while asking themselves “What would Dracula serve at his Halloween party?” “How can we evoke the feeling of your hair rising up as you tiptoe through a haunted house?” “Which candies would you always trade your loot for?” The answers just might scare you.
The flavors will be available by the scoop, flight or pint at Salt & Straw scoop shops, Friday, October 4 through Thursday, October 31. Ship nationwide to anyone you want to spook this Halloween by ordering the Spooktacular variety pack online for $65 plus shipping through Salt & Straw’s website, www.saltandstraw.com.

This year’s unique Spooktacular flavors include:

The Great Candycopia
As darkness falls across the land, the candymaking hour is close at hand. Lurking in every corner of our kitchen are swarms of homemade choccult inclusions: crisp shortbread and nutty nougat buried alive in caramel and chocolate, peanut butter trapped inside walls of chocolate, pecans smothered in BOOrbon vanilla toffee. We continue committing candy treason by cramming heaps of each bar into a disgustingly delicious salted butterscotch ice cream, stuck for eternity. Sweet tooths rejoice—this flavor is like upending your whole bag of trick-or-treat favorites right into our ice cream maker.
Mummy’s Pumpkin Spiced Potion (v)
Scene: August Uncommon Tea, an unconventional craft tea company in L.A.’s Arts District. In the middle of their lab, a cauldron boiling. Inside, amber leaves of rooibos flicker, then flakes of dried pumpkin make the gruel thicker. A fuming broth of caramel sputters and sizzles, while a sliver of spiky blackberry shoot fizzles. Three stinging droplets of vanilla smolder. Slips of Turkish apple make it now colder. Their intoxicatingly rich pumpkin tea, Psychocandy, is so buttery and perfect for autumn that we brewed our potion by mixing it into coconut cream and a luscious ribbon of earthy pumpkin butter. Sweet, spicy pumpkin ice cream…Challenge accepted, PSL lovers.
Creepy Crawly Critters
Walking through a haunted house, your hand is thrusted into a bowl of squelching guts. Then cold, slimy eyeballs. Reaching for the brains something grazes your arm, making your hair stand up. One, two, ten prickles along your skin. Whipping off your blindfold you spy dozens of spiders wriggling up your body. Now, we’re not going to let any critters loose on you, but we are delivering dozens hiding in the grass by way of this matcha ice cream with toffee-brittle mealworms and chocolate crickets. La Cocina graduate Don Bugito in Oakland provided the delicious insects, and we brought the creepy. Be careful though—did that one just move?
Dracula’s Blood Pudding
Crafted for all you Halloween thrill shriekers, our research & devilment team channeled Dracula for this bloodcurdling ice scream. We started with pig’s blood from one of our favorite partners, Portland’s Nicky USA, and cooked it with a heady combination of warm spices and cream to make a real blood pudding. Then we rounded it out with sweet cream and cocoa and spun it in our la-gore-atory for a rich, chocolatey ice cream with a hint of minerality. We dare you to try it without squirming…with delight.
Black Cat Licorice & Lavender
It’s late on Halloween night. The trick-or-treaters have dispersed. You clutch your jacket tighter as a cold wind picks up, concentrating on the hurried clack of your footsteps. Rounding the corner you let out a ghastly squeal as a jet-black figure with barely discernible copper cat eyes jumps the fence and pounces on your shadow. In this ominous, unexpected flavor, we’ve conjured up the superstition-laden black cat with a silky, pitch-dark anise & fennel caramel that dissects a luminous salted lavender ice cream. Find two stark, often divisive flavors that pleasantly collide, at least in this world. Still, we wouldn’t turn your back if we were you.
###
About Salt & Straw Ice Cream
Salt & Straw Ice Cream is a Portland-based, family-run ice cream company that was founded in 2011 by cousins Kim & Tyler Malek. Salt & Straw makes unbelievably delicious ice creams that tell the narrative of artisans, meaningful food movements and important social causes. The company creates a unique menu that changes every four weeks, makes ice cream by hand in small batches and designs a generous store experience that’s personalized and welcoming. The debut Salt & Straw Cookbook was released in April 2019, published by Clarkson Potter. Salt & Straw presently has three scoop shops in Portland, one in Lake Oswego and the Wiz Bang Bar at Pine Street Market. Pint packs are available for online purchase, and can be shipped anywhere in the United States as well as through the Salt & Straw Pints Club.
Find more information at www.saltandstraw.com, or call 503-954-1458. Follow us on Facebook at Salt and Straw Ice Cream, Twitter and Instagram: @SaltandStraw.
Previous Post: « September news at Pok Pok!
Next Post: Our Fall Dinner Menu Launches This Thursday! »