A fundraiser supporting democracy in Belarus, happy hour at Alfresca, and now you can order Russian taco salads and Khachapuri bread bowls to-go!

A Fundraiser for Belarus

While Americans focus on our own election year, across the world in Belarus where Kachka chef/co-owner Bonnie Morales’ family is from, people are protesting for democracy and met with violence from the government. “It’s heartbreaking to watch such violence and brutality unfold in my parents’ home country. Kachka stands in solidarity with Belarusians who are protesting the fraudulent re-election of Alexander Lukashenko. We are energized seeing long overdue wide-spread opposition and the birth of a free and just Belarus. But we can not simply watch from afar — they need our support to keep pushing forward.”

To support these efforts, Kachka will introduce a special plate on the menu at Kachka Alfresca and to-go at Lavka this Friday. Draniki (or latke, potato pancakes), a classic Belarusian dish, will be $12 and served with a changing accompaniment (to start, it will be garnished with smetana and house cured King salmon roe). 100% of proceeds will go to the Defend Belarus fund, for as long as funds are needed.

Since opening, Kachka has been a staple on Portland’s happy hour map. Now that Kachka Alfresca, Kachka’s socially distant outdoor pop-up has found its rhythm, happy hour is back! Starting Monday and running every day from 3-5 pm, guests will arrive to find a playful menu of jello shots, lavash nachos, khachapuri garlic knots and more. Reservations can be made here, or just stop in to lay claim to a table under your own private cabana. mRe

Alfresca’s menu of ‘90s Americana with a Kachka twist (think Southwest Soviet Cobb Salad, Spinach-Artichoke Khachapuri Bread Bowls, Jalapeño Popper Chicken Kiev, Lamb Lyulya Burgers, Totino’s Pizza Roll Vareniki) is now available to order to-go, along with beer and wine. The menu also includes some of Kachka’s greatest hits, such as Herring Under a Fur Coat and Baltic Sprat Buterbrodi. The full menu can be viewed here, and to-go orders can be ordered by phone between 3-9pm to 503.235.0059. 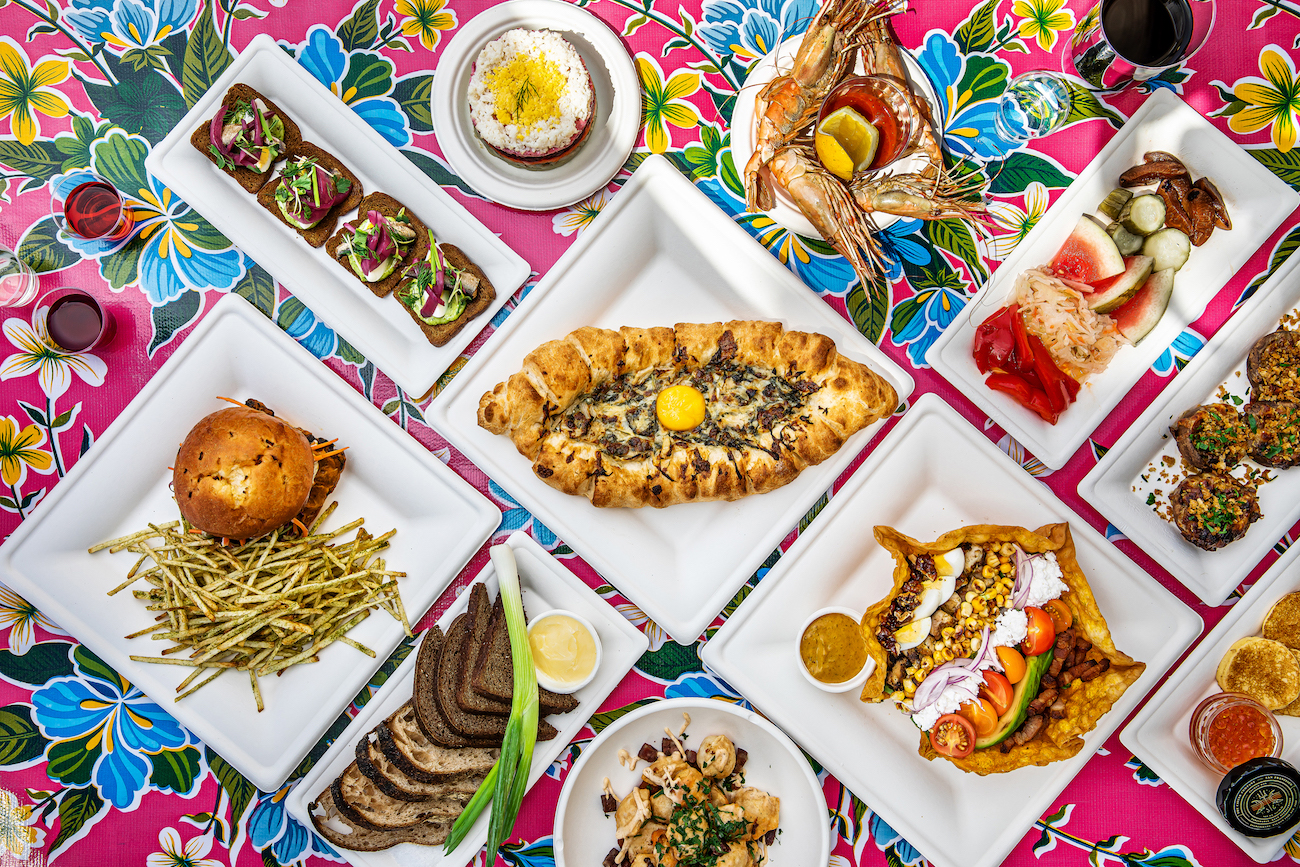 A spread of food and drink at Kachka Alfresca, photo by Carly Diaz

Kachka sparked a Russian food revolution when Bonnie and Israel Morales opened their Portland restaurant in 2014. James Beard Award nominated Chef/Co-Owner Bonnie Morales cooks the food of the former Soviet Union, including many dishes inspired by those she grew up eating in her Belarusian family. Kachka is considered by many to be the best Russian restaurant in the country, and is the only Portland restaurant to be included in America’s Essential Restaurants of 2015, 2016, 2017 and 2018 by Eater, inducted into their restaurant “Hall of Fame.” Kachka was named one of GQ’s Most Outstanding Restaurants of 2015 and Bon Appétit’s Best New Restaurant nominees in 2015, and was a semifinalist for 2015’s James Beard Award for Best New Restaurant.  In fall of 2019, the Morales’ opened Kachka Lavka, a deli and grocery upstairs from Kachka, which Eater National called one of the most anticipated openings of the season. Kachka and Kachka Lavka are located at 960 SE 11th Ave.,Portland, Oregon. Kachka Alfresca, Kachka’s socially distanced, outdoor summer pop-up, is open daily from 3-10pm. Follow Kachka on Instagram and Twitter @KachkaPDX kachkapdx.com

Goodness! So good and no cholesterol. I don’t kn