The sought-after spirit is on sale starting today, just in time to warm the winter and add spice to the holidays

PORTLAND, Ore. (Dec. 3, 2020) – After three years out of production, Kachka’s Horseradish Vodka was freshly bottled yesterday by new distillery partner Martin Ryan Distilling and is on sale beginning today at noon from their Aria Gin tasting room in Northwest Portland ($28.95/ 750ml). It will be heading to liquor stores throughout the state of Oregon within the next week, and will be available for delivery in Portland via At Your Door. Fans are encouraged to request Kachka Horseradish Vodka at their local liquor store to see it on the shelves as soon as possible, in time for holiday gifting and celebrations. 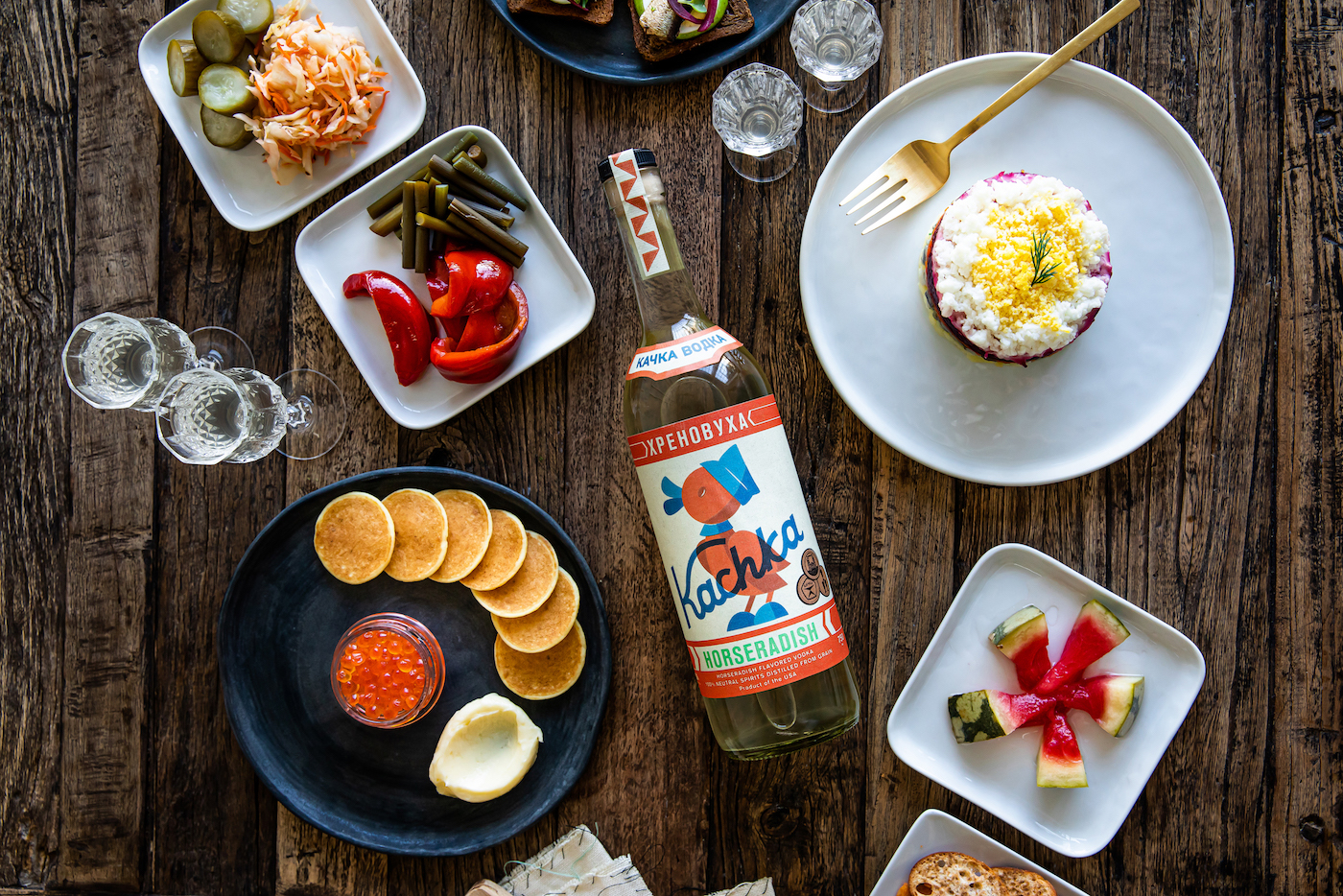 Kachka Horseradish Vodka with zakuski (a menu of zakuski to go is currently available from Kachka), by Carly Diaz

Kachka’s Horseradish Vodka recipe is a nod to history, an age-old drink traditionally made in homes throughout the former Soviet Union. Of the dozens of housemade vodka infusions created by Kachka (from Angelica root to zubrovka) over the years, horseradish is by far the most popular. Kachka’s version is made from the restaurant’s house recipe achieved by much trial and error — and a chance tip owners Bonnie and Israel Morales gleaned from a waiter on a trip to Saint Petersburg. Each bottle of Kachka Horseradish Vodka is made from fresh horseradish root and a drop of local honey, and is best served ice cold, straight from the freezer.

Kachka’s horseradish vodka has been a long time guest and staff favorite, smooth with just the right amount of heat, and the perfect accompaniment to a variety of foods and flavors, from zakuski to sushi. It’s traditionally served chilled in shot glasses, but makes an excellent base for martinis and Bloody Marys. Kachka will eventually retail the bottled vodka from their deli, Kachka Lavka, but in the meantime, Kachka Lavka is stocked with shot glasses and other gifts for vodka lovers, and culinary accompaniments. Herring Under a Fur Coat, a selection of caviar, myriad zakuski and Kachka’s restaurant meals are available nightly for online ordering to-go to recreate Kachka’s “clink, drink, eat, repeat,” experience at home. The restaurant will be adding Bloody Masha (Kachka’s Bloody Mary) kits to the online offerings within the week. 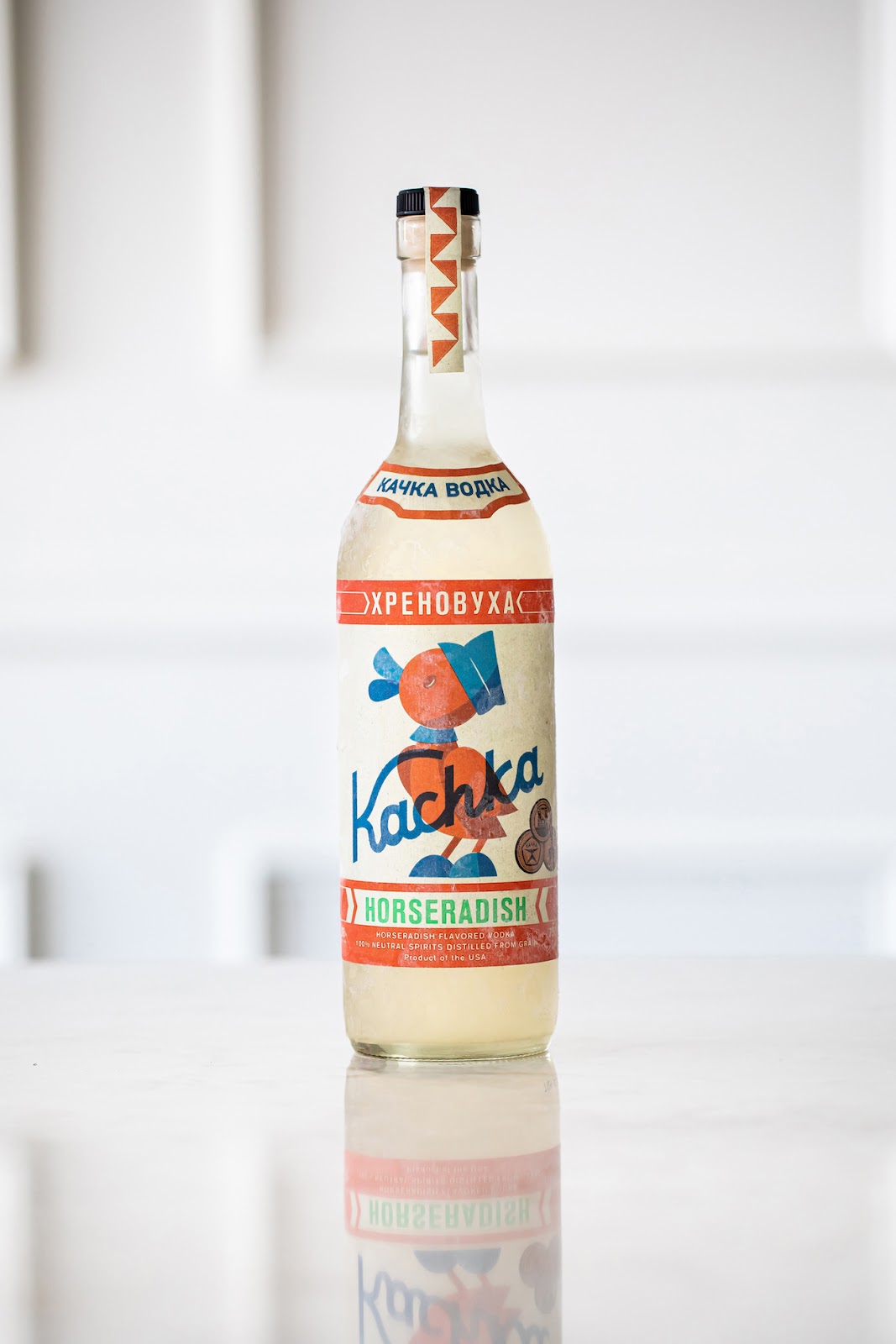 Kachka sparked a Russian food revolution when Bonnie and Israel Morales opened their Portland restaurant in 2014. James Beard Award nominated Chef/Co-Owner Bonnie Morales cooks the food of the former Soviet Union, including many dishes inspired by those she grew up eating in her Belarusian family. Kachka is considered by many to be the best Russian restaurant in the country, and is the only Portland restaurant to be included in America’s Essential Restaurants of 2015, 2016, 2017 and 2018 by Eater. Kachka was named one of GQ’s Most Outstanding Restaurants of 2015 and Bon Appétit’s Best New Restaurant nominees in 2015, and was a semifinalist for 2015’s James Beard Award for Best New Restaurant. Kachka started a spirits label in 2016, retailing their bottled Kachka Horseradish Vodka (sold until 2017). A cookbook of recipes, Kachka: A Return to Russian Cooking by Bonnie Frumkin Morales with Deena Prichep, was released in November, 2017 to critical acclaim. In fall of 2019, the Morales’ opened Kachka Lavka, a deli and grocery upstairs from Kachka. Kachka and Kachka Lavka are located at 960 SE 11th Ave., Portland, Oregon in the Central Eastside neighborhood. While Kachka’s dining room is currently closed, a menu of takeout items from the restaurant is available to order nightly from 5-9 pm, and Kachka Lavka is open for grocery and deli pickups daily from 9 am-5 pm. Kachka’s dumplings are also available by mail order in the continental U.S. More info and ordering at kachkapdx.com. Follow Kachka on Instagram @KachkaPDX and Kachka Lavka at @Kachka_Lavka