PORTLAND, Ore. (Oct. 14, 2020) – Beginning today, Kachka’s frozen dumplings are now on sale at 18 Portland-area New Seasons Markets. Widely regarded as the best Russian restaurant in the country, Kachka’s most popular dishes have always included their dumplings, and now even more people can make them at home–in under five minutes. The restaurant began packaging their frozen dumplings for retail last fall for their shop and deli, Kachka Lavka, and shortly after the pandemic closed the restaurant they began shipping them nationally direct to customers. This summer, Kachka began wholesaling frozen dumplings to Portland’s Green Zebra Grocery, and today, they’re available across the larger Portland Metro Area.

“We’re thrilled to make our dumplings available to a wider audience,” says chef/co-owner Bonnie Morales, who as a busy restaurant owner and mother, always has dumplings stocked in her freezer at home. “We hope the ease of picking up frozen dumplings with your groceries will not only offer people a quick and delicious meal, but also introduce them to this incredible cuisine.”

With Kachka doing the work of making and filling the dumplings, this iconic restaurant dish can be prepared at home  in less than five minutes out of the freezer. They’re traditionally garnished simply with pantry staples: butter, white vinegar, and salt (and herbs if you have them).

Kachka aims to add Siberian Pelmeni (filled with pork, beef and onion) to the wholesale offerings by the end of the year pending USDA approval, but for now, those are available exclusively from Kachka. 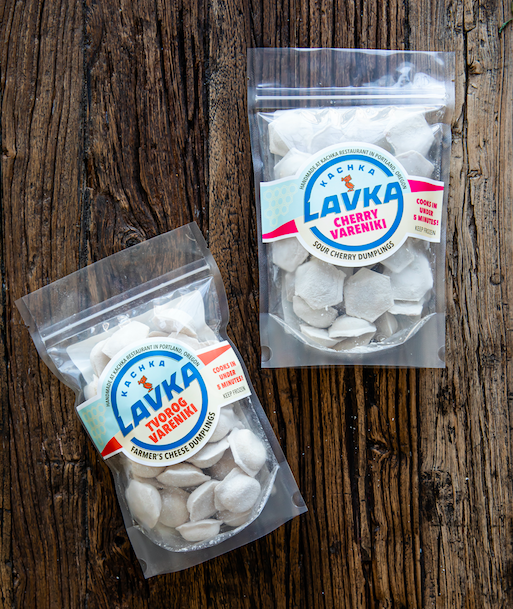 Kachka sparked a Russian food revolution when Bonnie and Israel Morales opened their Portland restaurant in 2014. James Beard Award-nominated Chef/Co-Owner Bonnie Morales cooks the food of the former Soviet Union, including many dishes inspired by those she grew up eating in her Belarusian family. Kachka is considered by many to be the best Russian restaurant in the country, and is the only Portland restaurant to be included in America’s Essential Restaurants of 2015, 2016, 2017 and 2018 by Eater, inducted into their restaurant “Hall of Fame.” Kachka was named one of GQ’s Most Outstanding Restaurants of 2015 and Bon Appétit’s Best New Restaurant nominees in 2015, and was a semifinalist for 2015’s James Beard Award for Best New Restaurant.  A cookbook of recipes, Kachka: A Return to Russian Cooking by Bonnie Frumkin Morales with Deena Prichep, was released in November, 2017 to critical acclaim. In fall of 2019, the Morales’ opened Kachka Lavka, a deli and grocery upstairs from Kachka, which Eater National called one of the most anticipated openings of the season. Kachka and Kachka Lavka are located at 960 SE 11th Ave., Portland, Oregon in the Central Eastside neighborhood. While Kachka’s dining room is currently closed, a menu of takeout items from the restaurant is available to order nightly, and Kachka Lavka is open for grocery and deli orders daily. Kachka’s dumplings are also available by mail order in the continental U.S. More info and ordering at kachkapdx.com. Follow Kachka on Instagram and Twitter @KachkaPDX.