An apple carries 100 million bacteria. Good luck washing them off. 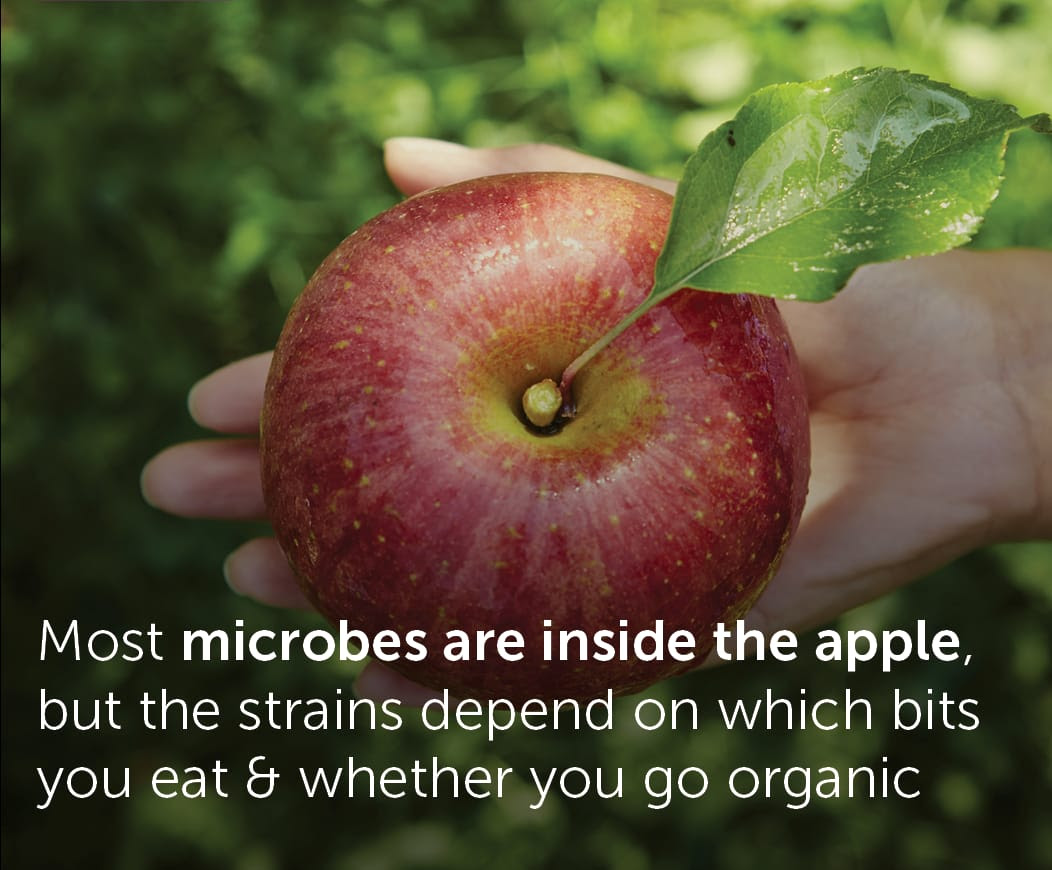 To the heroes among you who eat the whole apple: besides extra fiber, flavonoids and flavor, you’re also quaffing 10 times as many bacteria per fruit as your core-discarding counterparts.

Is this a good thing? Probably. But it might depend on how your apples were grown.

Published in Frontiers in Microbiology, a new study claims that organic apples harbor a more diverse and balanced bacterial community – which could make them healthier and tastier than conventional apples, as well as better for the environment.

You are what you eat

Nowhere more so than your bowel.

“The bacteria, fungi and viruses in our food transiently colonize our gut,” says study senior author Professor Gabriele Berg, of Graz University of Technology, Austria. “Cooking kills most of these, so raw fruit and veg are particularly important sources of gut microbes.”

To help us choose our colonic colonists wisely, Berg’s group analyzed the microbiome of one of the world’s favorite fruits: the apple.

“83 million apples were grown in 2018, and production continues to rise,” says Berg. “But while recent studies have mapped their fungal content, less is known about the bacteria in apples.”

The researchers compared the bacteria in conventional store-bought apples with those in visually matched fresh organic ones. Stem, peel, flesh, seeds and calyx – the straggly bit at the bottom where the flower used to be – were analyzed separately.

Overall, the organic and conventional apples were occupied by similar numbers of bacteria.

“Putting together the averages for each apple component, we estimate a typical 240g apple contains roughly 100 million bacteria,” reports Berg.

The majority of the bacteria are in the seeds, with the flesh accounting for most of the remainder. So, if you discard the core – for shame! – your intake falls to nearer 10 million. The question is: are these bacteria good for you?

When it comes to gut health, variety is the spice of life – and in this regard, organic apples seem to have the edge.

“Freshly harvested, organically managed apples harbor a significantly more diverse, more even and distinct bacterial community, compared to conventional ones,” explains Berg. “This variety and balance would be expected to limit overgrowth of any one species, and previous studies have reported a negative correlation between human pathogen abundance and microbiome diversity of fresh produce.”

“Escherichia-Shigella – a group of bacteria that includes known pathogens – was found in most of the conventional apple samples, but none from organic apples. For beneficial Lactobacilli – of probiotic fame – the reverse was true.”

And there may even be vindication for those who can “taste the difference” in organic produce.

“Methylobacterium, known to enhance the biosynthesis of strawberry flavor compounds, was significantly more abundant in organic apples; here especially on peel and flesh samples, which in general had a more diverse microbiota than seeds, stem or calyx.”

There are some caveats to this study. Most importantly, the conventionally grown apples were packaged and refrigerated for days before analysis. The organic apples meanwhile were analysed immediately following harvest, and were grown on a different farm – albeit in the same region of Austria.

“Our results agree remarkably with a recent study on the apple fruit-associated fungal community, which revealed specificity of fungal varieties to different tissues and management practices,” comments Birgit Wasserman, Berg protégé and co-author of the study.

Since the apple fungal community is also specific to each apple variety, the bacterial analyses ought to be repeated in other cultivars.

“The microbiome and antioxidant profiles of fresh produce may one day become standard nutritional information, displayed alongside macronutrients, vitamins and minerals to guide consumers,” suggests Wasserman. “Here, a key step will be to confirm to what extent diversity in the food microbiome translates to gut microbial diversity and improved health outcomes.”###

Please link to the original research article in your reporting: https://www.frontiersin.org/articles/10.3389/fmicb.2019.01629/full

Frontiers is an award-winning Open Science platform and leading Open Access scholarly publisher. Our mission is to make research results openly available to the world, thereby accelerating scientific and technological innovation, societal progress and economic growth. We empower scientists with innovative Open Science solutions that radically improve how science is published, evaluated and disseminated to researchers, innovators and the public. Access to research results and data is open, free and customized through Internet Technology, thereby enabling rapid solutions to the critical challenges we face as humanity. For more information, visit http://www.frontiersin.org and follow @Frontiersin on Twitter.

Previous Post: « Spice of the Month 10% Off | Chai and Coffee | Great Curry, not Steph
Next Post: GROW Gives Back to Communities in Need »